We were told that the drive to Huaraz from the city of Chimbote, which serves as sort of a Huaraz jumping point, takes 5-8 hours by bus.  We didn’t really know what to expect since 5-8 hours is a pretty huge range and the buses here are maniacs on wheels.

Chimbote is the largest fishing port in Peru.We thought it would be best to spend the night in Chimbote, to get an early start the following morning.  In this city, sleeping in the van was out of the question and every hotel we looked at was overpriced and a bit dingy.  We finally settled on a clean, simple place and went to bed early, looking forward to an early start the next day.  Apparently Peruvians not only party on the night before Easter but Easter night is a rockin rollin good time too.  For the second time in a weekend, we were awake until 4am with the vibrations coming from the booming music across the street. 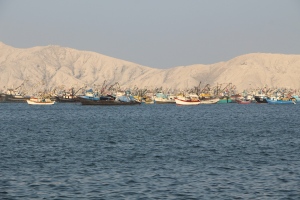 The next morning, we got a great view of the fishing boats got the heck out of Chimbote, starting our drive toward the apparently hair raising Canon de Pato.  On the was we stopped for instant coffee and condensed milk and the kids got a piece of sugarcane to gnash their teeth on. 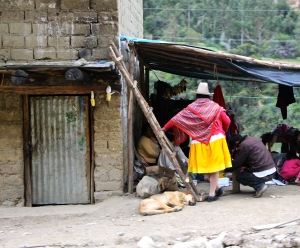 The Canon de Pato was beautiful and afforded us a view of the Cordillera Blanca and Cordillera Negra.

I suppose it would have been hair raising if we hadn’t spent 2 months driving in Colombia.  The drive was beautiful, with the occasional moments when the shear cliff to our left while being passed by maniac buses, made for very attentive driving.  Hair raising…not really.

We stopped in Yungay, where, in 1970 and earthquake that sent 50 million cubic meters of debris rushing down from Huascaran, buried the town and it’s 25,000 inhabitants.

We pulled into Huaraz, on a rainy afternoon, very excited to be here.  After going from place to place asking about parking our van and using facilities, I was given repeated looks of “you mean, you want to free load?”, my trying to explain that WE’D PAY was futile.  We found a very nice and comfortable hostel, and went out for our second real beer and good pizza in over three months.  We felt as special as royalty.

At over 10,000ft, we knew we needed to spend a few days acclimating before doing any high elevation hiking or climbing.  We spend the second day not far from here, having so much fun rock climbing that we only stopped when we were shaking with fatigue and our fingers were screaming from skin loss. 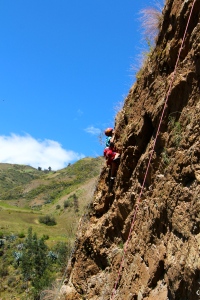 We planned on leaving Friday for the Santa Cruz Circuit, a four day trek.  On thursday morning, as we were enjoying our morning coffee with our first cloud free view of Huascaran, we were informed that Darin’s nephew, Scott had passed away unexpectedly.

I ran to a cafe with real wifi and within an hour had booked Darin’s return home by way of an 8 hour ride to Lima on a maniac bus and 14 hours of flight travel to JFK.  We took a taxi to the bus terminal and with very heavy hearts, after three months of being together every waking minute, it was over.

Scott was only 35 years old.  He had an infectious smile, a giant heart and he leaves behind 2 amazing kids and a heart wrenched family.

Darin will be gone for a week and the kids were still going to do the 4 day Santa Cruz circuit.  We were suppose to leave friday morning but Simon got hit with the full meal deal of sickness.   Our rock climbing guide and new amigo nailed it on the head when he said “We Peruvians have special stomachs, and after three months of travel in America Del Sur, your stomachs are trying to become special”.

We’ve decided to rest, and explore the area through day trips.  We’re spending time daily at the local market and making a lot of comfort food.  We’re really not doing much of anything and it feels like it’s exactly what we should be doing. 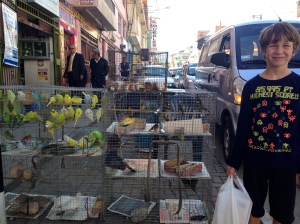 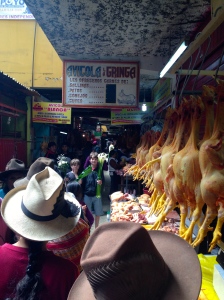 For now, we send all our love and sympathies to our family in New York and we do our best to not feel so far away.

11 thoughts on “Journey to Huaraz by: Anik”