Crossing into Peru by: Anik. 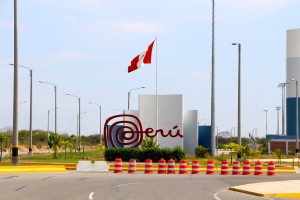 Marco is in top form again.  The area we were in had a prominent Dengue fever problem and we certainly got pummeled by enough mosquitoes to make this a likely culprit.

We woke up and I surfed Playas but never figured out the low tide mess of waves. 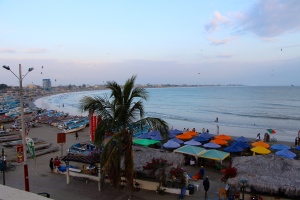 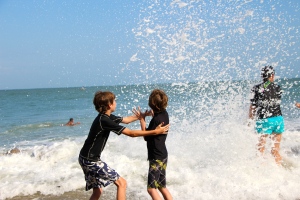 We went to an area of market stalls and bought  mosquito netting and $3.00 flip flops to replace my stolen Chacos…my fault for leaving them on the beach prior to a morning run. I guess I still haven’t learned.

When we first pulled into Playas 5 days prior, the intention was to stay one night.  A week later, we were looking to spend one more night in Puerto Engabao and have one more surf.  As soon as we pulled in, once again stopping for several nursing pigs, the kids got out of the van and walked to the surf shelter while Darin jumped into the surf with his board. 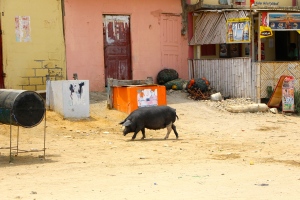 The waves were much bigger than a few days prior and Darin looked like the waves were whipping him into shape.  Our sunset surf slammed us with the biggest waves we’ve ever seen while surfing.  I kept clenching my teeth while dropping f-bombs inside my head as they approached.   The full, to be blood moon lit our way as we walked back to the surf shelter.

We had an amazing night in the van, protected by our mosquito netting.  Take that blood sucking suckers!

We spent the following morning having a conversation with Daniel, the hostel’s Ecuadorian owner.  He asked that we write about his crusade so here goes…

Despite Ecuador’s recent tourism campaign, the country very much struggles with garbage disposal education.  For example, the tiny fishing village of Puerto Engabao is home to 300 fishing boats that go out to sea twice per day.  Each boat is operated by 2 fishermen.  Prior to going out to sea, each fisherman brings a disposable container of food called a torrina. 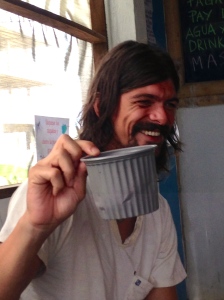 Everyday, twice per day, each fisherman throws out their torrina overboard, into the water.  That makes 1200 torrinas per day, thrown into the ocean, just for the tiny village of Engabao.  Doing the math for what that means in terms of all fishing villages in Ecuador, it’s a shocking truth. 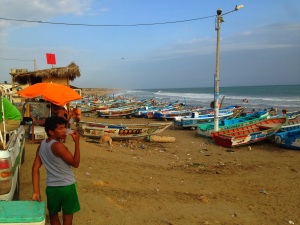 Daniel organizes monthly beach clean up efforts, but without awareness and education, the effort is a never ending chase, with no viable solution.   According to Daniel, the Ecuadorian government, in its’ campaign to win over tourists, is willing to listen to conversations like the one discussed here.  If you travel to Ecuador and witness the garbage on the beach, and the burning of this garbage, please take a moment and write a few words about it.

We left Engabao and headed for Guyaquil, Ecuador’s largest city. 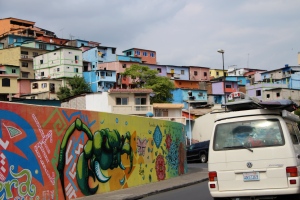 We wondered around, doing a bit of an urban climb, in the sticky, muggy, heat of the day. 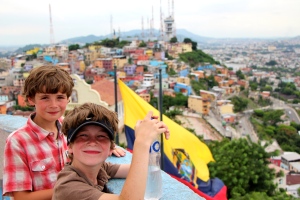 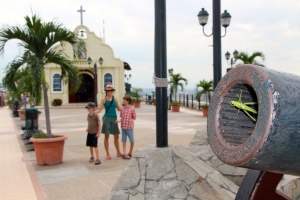 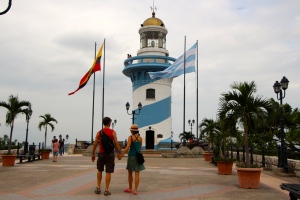 Hotels with parking were impossible to come by.  Whenever we move locations, the process of finding a place to stay is a constant negotiation and re-arrangement.  This was no exception.  We stayed in a business hotel, which was by far the most modern place we’ve been in in three months.  As we were checking in, the boys were bouncing around talking about the AC and the elevators.  It was like they’d never been anywhere.  We used an iron for the first time in three months, ordered room service, and after taking a bath (also a first), Marco slept in the complimentary robe.

Yesterday morning, we headed for the Peruvian border.  After going through the motions and spending about 3 hours going from one office to another, we drove onto Peru’s dusty, brown landscape, eyes wide open to the next 5 weeks’ possibilities. 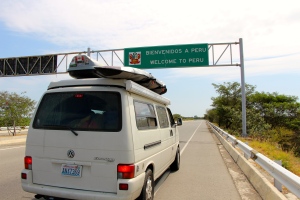 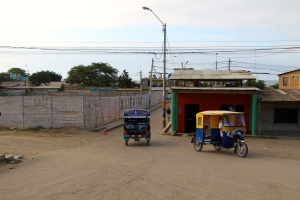 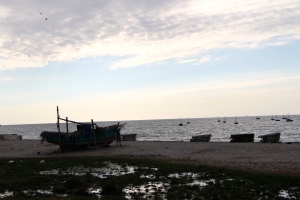