Santa Cruz and the Cordillera Blanca by: Anik.

Waiting in Huaraz by: Anik.

As far having to spend the week without my main squeeze, Huaraz does just fine.  The beauty that surrounds this place seems to reveal itself little by little, once again, bringing out my inner cheese making fantasies.

There are peaks to climb and high elevation hikes everywhere I look.  Most of these temptations aren’t possible with the kids at this point, despite their trying to convince me to leave them with a bit of money, some snacks, and a few movies.

It took a few days for Simon to start feeling better.  On sunday, I was told that the Lake Llacca hike we wanted to do couldn’t be reached with our van.

Eli, a very nice man in a 4×4 pick up truck picked us up early in the morning and we headed out for the hour and a half drive to Llaca.  Well, they weren’t joking.  The road was insane with rocks, deep ruts, and pot holes.  We bounced our way up the road, hitting our heads on the roof of the truck, looking down at the cliff to our left, all while trying to make conversation with Eli, as he was falling asleep at the wheel…”Todo va bien señor?”.

The hike was short but the it’s 4600 meter elevation made itself known, especially to Simon, who petered out an hour into it.  On the hike back, with his head in the rocks, Marco declared “I wish we just had the money to buy a UTV when we get home instead of having to find a diamond or gold to buy it with.”  So much for our theme of “see boys, you really don’t need much to be happy!”. 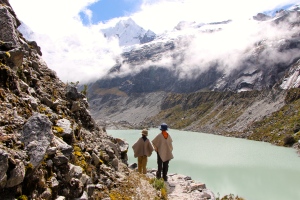 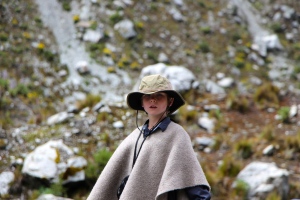 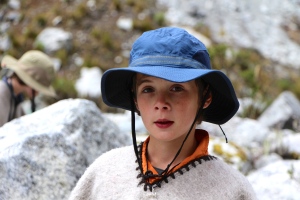 As we walked back to the truck, the kids hung out with señor Eli while I walked up a different way and found myself laying on my back, next to this trickle of water and a few wildflowers.  I laid there, staring at the jutting peak in front of me, stuck in an existential frame, thinking about life and all the wasted time we spend on anger, fear, and stress.  I think it’s time for me to come home because my “real life” seems a bit out of my grasp, plus I think I’m getting weird.

On the way back down to Huaraz, the kids and I spent some serious time, declaring our love for donkeys.  I’d love to come home and see donkeys packing gear and goods through the streets of Longview.

On monday, we made our way to the cochera where our van was parked.  The muchacho in charge of opening the doors for us kept telling me over the phone “mas tarde”, “come back later”.  After a few hours of back and forth, we got the van out and headed to the banos thermals of Chancos.

The community of Chancos has converted 7 caves into natural steam baths, all of varying temperatures.  The one we chose was 37 degrees celcius.  The Peruvian helping us, led us into the room, opened the door to the dark cave, threw a few buckets of spring water on the ground and closed the door behind him.  The cave was dark, damp, and hot.  We sat there for about 30 minutes, covered in moisture.  The idea is to sit quietly and just breath and enjoy…I did my best while the kids were splashing in the cave puddles, jumping up and down to see who could reach the highest rock, and going in and out to cool off a bit.

After our cave sauna, we were taken around the corner, where a man wearing big rubber boots, filled up 2 tubs for us with brown, sulfur smelling spring water.  As the tubs were being filled, Marco, covering his mouth and nose said “I think I’m only up for a short bath today.”

The man added an herb concoction and we were left to it.  The kids sharing a tub and I, in a separate room with my own tub and book.  When we got out, I felt like I was glowing and detoxed.  When I asked the kids if I looked refreshed and beautiful, they answered “ugh, I don’t know, I guess”.

We stopped on the way back for another Almuerzo typica for $4.00.  At this point, the cheap prices and the novelty of eating the grub fed, organic chicken grown out back has worn off and although the kids seem fine with it, I’m SO over it.

On the way back to Huaraz, we got stuck in a 2 and a half hour traffic jam due to a head on collision where a collectiva (a small passenger carrying bus) caught fire and resulted in 6 people dying.  Marco later told me that I could stop telling them how grateful we should be that we stopped at that artisan stand for a few minutes before driving past that curve where people play chicken with their lives.

This morning, the kids and I left on foot to visit the ruins of Willkawain, which date back to 600AD.

We read that it would be an hour and a half long walk through the countryside from Pinar, which is about 10 minutes from Huaraz.  The taxi dropped us off in Pinar and like all Peruvians giving directions, he pointed north and said “that way”.  We started walking and within 10 minutes, we were in a mud field, surrounded by lactating pigs and teenage chickens. 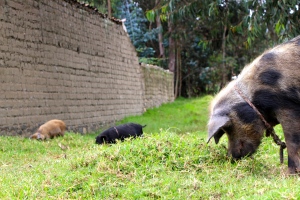 A lady sitting on a corner pointed east and said “that way”.  We found ourselves walking through farmland along a small single track sort of path, lost once again.  A farmer saw us and waved us over and escorted us another half kilometer through peoples’ country home backyards, with a lot of pissed off dogs and a bull that wouldn’t let us by. 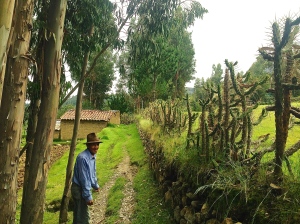 The man stopped in his tracks and pointed down a hill and said follow the path (crushed grass) until you get to a small road, take it north, and you can’t miss the ruins.  We arrived at the calleretta, and started walking up.  We were directed by a man sitting on another corner to take another small path up.  This one took us through dozens of other small backyards, with plenty more dogs who thought we should mind our own business. 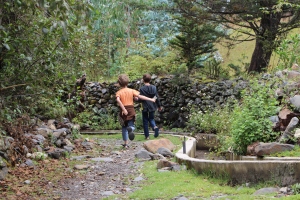 After making 5 more guesses at roads and turns, and paths, with no sign of the ruins in sight, we found a road and guessed on the directions, which, luckily took us to the ruins. 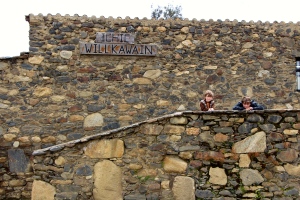 Ecuadorians and Peruvians have a very interesting way of giving directions.  It’s always…”over there”…which can mean “3 miles that way”, or “make 3 rights and 4 lefts”, or “you’re going the wrong way”.  Either way, it always comes down to pointing in a direction and saying “there”.

The ruins were cool, as far as old archeological sites go.  This site was one where VIP’s were mummified and placed inside with various offerings of pottery and such.  The kids were using my iphone flashlight to creap each other out inside the dark passageways.  Luckily no one else was there to hear their loud pitched screams. 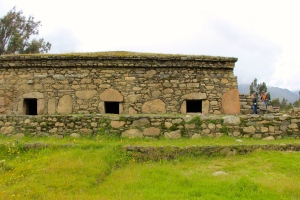 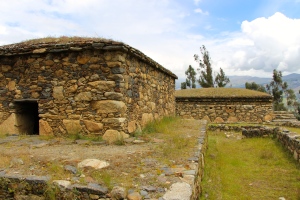 At the insistence of the kids, we took the collectiva back to town, and sat very snuggled to all the other Peruvians (staring at us) and their giant bundles of grasses stored up on top of the bus.

The ride back to town was bumpy, hot and a bit nauseating.  The kids maintain that it was “much better than walking”…I maintain that once in a while I have to throw them a bone to keep them happy.

Journey to Huaraz by: Anik. 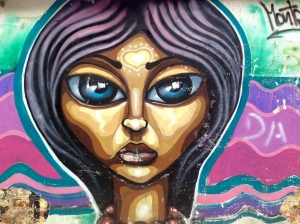 We were told that the drive to Huaraz from the city of Chimbote, which serves as sort of a Huaraz jumping point, takes 5-8 hours by bus.  We didn’t really know what to expect since 5-8 hours is a pretty huge range and the buses here are maniacs on wheels.

Chimbote is the largest fishing port in Peru.We thought it would be best to spend the night in Chimbote, to get an early start the following morning.  In this city, sleeping in the van was out of the question and every hotel we looked at was overpriced and a bit dingy.  We finally settled on a clean, simple place and went to bed early, looking forward to an early start the next day.  Apparently Peruvians not only party on the night before Easter but Easter night is a rockin rollin good time too.  For the second time in a weekend, we were awake until 4am with the vibrations coming from the booming music across the street.

The next morning, we got a great view of the fishing boats got the heck out of Chimbote, starting our drive toward the apparently hair raising Canon de Pato.  On the was we stopped for instant coffee and condensed milk and the kids got a piece of sugarcane to gnash their teeth on.

The Canon de Pato was beautiful and afforded us a view of the Cordillera Blanca and Cordillera Negra.

I suppose it would have been hair raising if we hadn’t spent 2 months driving in Colombia.  The drive was beautiful, with the occasional moments when the shear cliff to our left while being passed by maniac buses, made for very attentive driving.  Hair raising…not really.

We stopped in Yungay, where, in 1970 and earthquake that sent 50 million cubic meters of debris rushing down from Huascaran, buried the town and it’s 25,000 inhabitants. 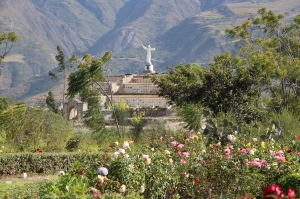 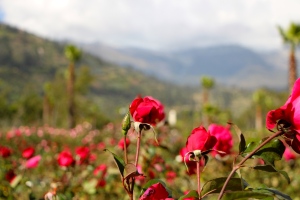 We pulled into Huaraz, on a rainy afternoon, very excited to be here.  After going from place to place asking about parking our van and using facilities, I was given repeated looks of “you mean, you want to free load?”, my trying to explain that WE’D PAY was futile.  We found a very nice and comfortable hostel, and went out for our second real beer and good pizza in over three months.  We felt as special as royalty.

At over 10,000ft, we knew we needed to spend a few days acclimating before doing any high elevation hiking or climbing.  We spend the second day not far from here, having so much fun rock climbing that we only stopped when we were shaking with fatigue and our fingers were screaming from skin loss.

We planned on leaving Friday for the Santa Cruz Circuit, a four day trek.  On thursday morning, as we were enjoying our morning coffee with our first cloud free view of Huascaran, we were informed that Darin’s nephew, Scott had passed away unexpectedly.

I ran to a cafe with real wifi and within an hour had booked Darin’s return home by way of an 8 hour ride to Lima on a maniac bus and 14 hours of flight travel to JFK.  We took a taxi to the bus terminal and with very heavy hearts, after three months of being together every waking minute, it was over.

Scott was only 35 years old.  He had an infectious smile, a giant heart and he leaves behind 2 amazing kids and a heart wrenched family.

Darin will be gone for a week and the kids were still going to do the 4 day Santa Cruz circuit.  We were suppose to leave friday morning but Simon got hit with the full meal deal of sickness.   Our rock climbing guide and new amigo nailed it on the head when he said “We Peruvians have special stomachs, and after three months of travel in America Del Sur, your stomachs are trying to become special”.

We’ve decided to rest, and explore the area through day trips.  We’re spending time daily at the local market and making a lot of comfort food.  We’re really not doing much of anything and it feels like it’s exactly what we should be doing.

For now, we send all our love and sympathies to our family in New York and we do our best to not feel so far away.