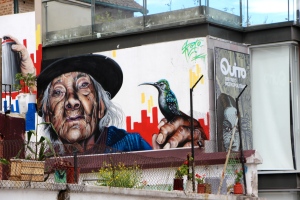 Considering that big cities haven’t been our favorite places to visit, objectively speaking, Quito has been the most beautiful city we’ve seen.  It’s old, warm, and it makes for excellent camera shots.

Our primary reason for going to Quito was that my mom was flying in for a 2 week visit and we were to fly to the Galapagos islands from the Quito airport.  We found a hostel named “The Secret Garden”.  It hosted a rooftop terrace that greeted us with panoramic views of the city which made us question if our eyes were playing tricks on us.

The owners were Australian and had a 10 year old boy, Thomas, who became Simon’s instant friend.  Over the next two days, we would spend a fair amount of time up on this terrace, sipping weak coffee, sipping wine from a box, and reading and writing as the kids were taking spanish lessons. 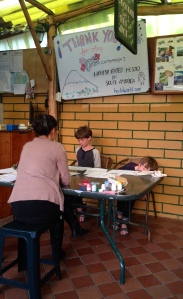 My mom flew in late the first night and I convinced Darin that I would drive the hour through the city to go pick her up as there was no need for all of us, including car sick prone Marco to spend over 2 hours in the van.  Simon and I set off and almost immediately got lost.  After driving on a deserted highway which turned out to be completely closed and rolling through a neighborhood thick with the risk of danger, we finally found out way.  Once we made it safely, Simon said “mommy, you sure said SHIT a lot on that drive…”.

Just like picking Tierra up from the Cartagena airport, greeting my mom in Quito felt excitingly surreal.  After showing my Palm Springs cultured mom the bunk beds and mini electric shower heater, we went to bed laughing.

The next day, we spent hours walking through the city, with my mom strong as a bull despite the thin air which hosts the world’s second highest capital city at nearly 10,000 feet. 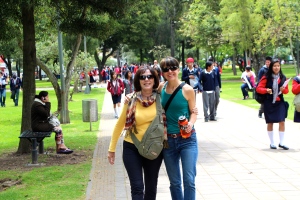 We climbed to the top of Quito’s basilica and marveled at the bird’s eye view of the city.

We had a basic almuerzo of comida tipica, which once again, consisted of chicken, rice, plantain, and homini.  It’s so good, but that ship has sailed and we’re craving something different.

We bought coca leaf from a street vendor yelling “coca! coca! coca!”.  Apparently the dried bay leaf looking coca works miracles for altitude sickness and acclimation.  Cotopaxi’s 19,000 ft (and change) summit push might serve as our double blind study.  The vendor sell coca candy, coca tea and pure leaf that you’re suppose to chew, which is what we went with.  We figure it should be best in its’ purest form.

We decided to go out for a nice dinner that night, as another chicken meal wasn’t gonna cut it.  We went to the neighborhood of La Ronda, the oldest and said to be quaintest area of Quito.  It was beautiful but the restaurants were far from quaint and the food surprisingly bad.  After leaving a few restaurants, we ended up in a karaoke sort of bar, with music so loud we couldn’t talk.  Half of our order failed to come, and we ended up eating rolled up deli cheese and baloney  held by toothpicks. We were given wine that tasted like a joke and realized it just wasn’t gonna happen. At this point, we needed to head back to bed for our 3:30am wake up call and resorted to eating a cold piece of pizza and strawberry soda from a street vendor.

For those of us accustomed to the creative culinary experience that Portland provides, we’re learning to be flexible and grateful for whatever comida we’re presented with.  Our van is parked in Quito, waiting for us on our return from the Galapagos, I think we’ll take in one last glimpse of this gorgeous city and and hit the road south…if Cotopaxi’s rainy forecast makes room for us.