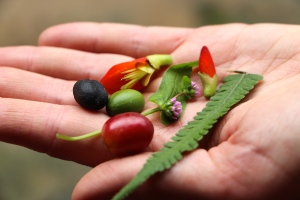 We woke up in Salento on Sunday morning to a panoramic view of the mountains of the Zona Cafeteria, where they grow Arabica and Colombiana beans.

Based on our overlander friend Francoise’s recommendation, we were camped at Serrana Eco Hostel, which more than suited our needs.  One of the most comfortable scenario for us is the country setting hostel where we can camp in our van but have use of all the hostel’s amenities.  Generally speaking, the camping fee is only 1/2 the regular hostel price but with luxuries like hot showers and toilets.  Hostel Serrana became our home for a much needed week of laying low and enjoying the scenery. 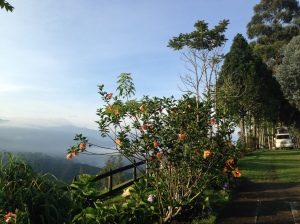 The town of Salento, a nice graveled 2 km walk away from our camp, was a very charming town, with the best artisan shops we’ve seen so far.  The town’s pride and attraction comes from its’ proximity to the Valle de Cocora and from its’ local trout farm.  All the restaurants of Salento advertise “Trucha de todos preparacion”.  The large, pink as salmon trout was delicious a la plancha, covered in garlic sauce and smothered in a cheese béchamel sauce with shrimp.  All trout meals come served with a giant chip the size of dinner plate made of local plantain.

Being in the zone cafeteria, one morning we walked down 4 kilometers through mud that sank us to our ankles to the Finca de cafe Don Elias.  Señor Elias greeted us personally and took us on a walking tour of his coffee farm.  He was the sweetest man and his passion for the coffee producing process was contagious.

Throughout the tour, Marco would occasionally ask “Is he gonna be done talking soon?”.  We learned that it takes two years for a newly planted coffee plant to flower.  Two weeks after it flowers, the beans, green in color begin to grow.   5 months later, when the beans are red (Arabica) or yellow (colombiana), they become ripe for picking.

Every 8 years, the plants are cut down to the ground, this allows for a fresh plant to grow and according to Señor Elias, this prevents bitter coffee.

He took us through the outer skin and inner skin removal process, the drying, the roasting, and the grinding. 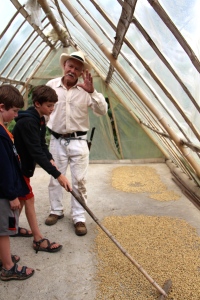 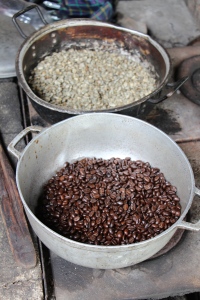 Our personal tour finished with the enjoyment of a cup of coffee.  Simon said it was the worst coffee he’s had, I’m thinking it was his second sip in ten years.

Colombians from this region are saying that the rainy season is here two months early.  When we heard this, we weren’t phased by it at all, we’re from the northwest eh?  When they say rain here though, they mean, leak producing torrential downpours with thunder and lightening that can last for hours.  These episodes happen daily, sometimes 2-3 times per day.

One beautiful early morning, with the skies clear, we took a 45 minute Willy ride to Valle de Cocora. 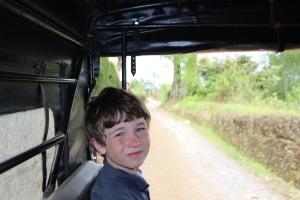 Once again, we found ourselves with a map meant for kindergartners and some half assed description of how to find the trail that was to take us 10 km through Cocora, with its’ beautiful Wax Palms. 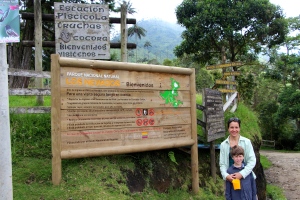 We had a lovely hike along the river and climbed up and up until it came to our attention that we were on the wrong trail.  By the time we found the trail head we were meant to be on, we’d already hiked 5 km. 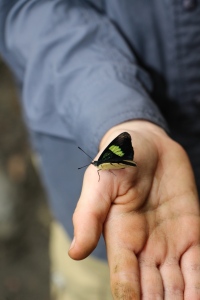 As we stepped over the threshold of the anticipated trail, the kids immediately went on strike.  “No way!  If I do this, I’ll die, I’d rather stop breathing!”  We started hiking up and up, reassuring the kids that the ascent would level off soon. One of these days those kids will call our bluff.

The walk up was beautiful, surrounded by Colombia’s national tree, the palma de vera, which are the tallest palms in the world.  We had lunch with a view beyond compare..and, the kids were still mad.

By the time we started back on our descent, the kids were happy again, enjoying Bom Bom Bums, these gum filled lollipops they can’t get enough of. 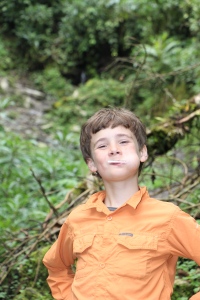 With about 2 hours left to our descent, the daily torrential downpour started.  We found ourselves crossing sketchy bridges and slip sliding our way down while sinking in the mud up to our mid calves.  The kids were in Indianna Jones mode and by now, loving every minute. 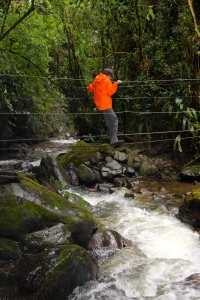 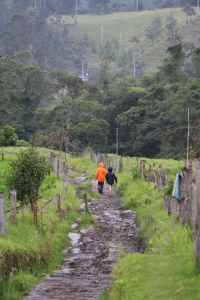 We spent the rest of our days in Salento with morning runs, afternoon walks to town, daily spanish lessons, and amazing evening dinners prepared by our hosts. 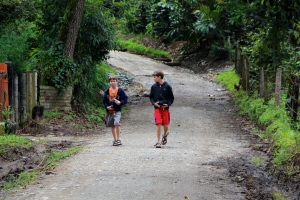 A few of the backpackers at the hostel were musicians, Simon spend hours serving as their drummer and jamming with them.

Leaving Salento, we grabbed one more of Marco’s favorite galletas con pepitas.  These very simple but crazy good shortbread like cookies with sprinkles, sold in most panaderias.

Other than going south, we don’t really have a plan for the next week. I guess we’ll just see where our van points its’ nose.  Darin mentioned this morning that he’d like to be at the Equator by March 20th, he’s got Cotopaxi on the brain.