We let loose a bit and spent one night on Laguna San Pablo, outside of Otavalo, at a lake side lodge called Hosteria Puerto lago. We very much felt spoiled by the tennis court, paddle boats, fireplaces, and nice restaurant. My 4 mile run over to the lake seemed unusual in those parts, as a dozen people slowed down or stopped to snap a picture of my less than impressive running.

By the time “check out” came, we were missing life in our van and looking forward to getting lost in self sufficiency for a while.

We crossed the equator in the early afternoon. We spent some time goofing around with cheesy pictures, once again, Marco’s was the picture of the day. 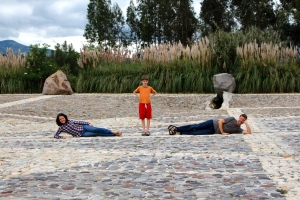 Before leaving on this trip, we’d intended on naming our van at the equator but we weren’t feeling it. We’ve decided to let the van name itself in due time, at which point we’ll all be ready.

The equator was quite fascinating. A young man from the non profit, Quitsato.org, an integral project focused on studying the equatorial line’s archeological sites with the application of satellite technology, filled us in on everything relating to the Mitad Del Mundo. He spoke about the perspective of balance in relation to our future. He spoke of the line between the two hemispheres as appealing to a conscience of balance, union, and reciprocity. At the risk of sounding a bit new age, we all did feel a very good sort of “connected and grounded” energy on this site. As Latin Americans would put it, it was “chevre”.

We continued on, to our destination, passing through a few small towns, one of which we stopped in for lunch. The only options for lunch were to step into someones house and sit at one of two picnic tables in the back. For $4.00, we ate soup, rice, chicken, salad, and drank fresh juice…hard to beat.

We had 29 km left to get to Oyacachi, our thermal spring respite for the next few days. The lovely woman, who needed a ride to her town, sat in the back with the kids and helped navigate us through the steep and slow cobble stone roads, and then she dozed off. 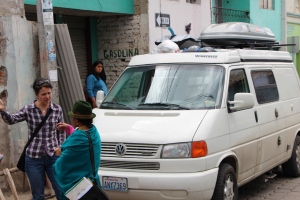 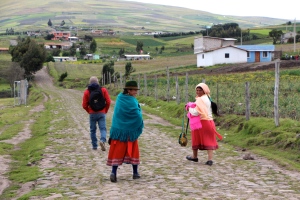 Oyacachi is a very small town in a valley in the middle of nowhere. It borders the Amazon jungle and revolves around its’ lechera route and community run thermal springs. 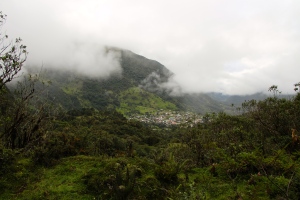 We camped a few hundred feet from the hot springs, surrounded by mountains and overlooking a river that played its’ music while we slept. In the morning, cold and appreciating the comfort of our van, we watched as most of the people from the area, walked long distances carrying large containers of their cows’ milk on their backs, to be dropped off at the pick up corner by our van. The lechera truck would then come by and pick up the milk to brought to the town’s lechera processing building, which was the size of a large shed. The one and only commercial business, a small tienda sold some amazing homemade drinkable yogurt, that would put any kefir I’ve had to shame.

We spent three days in Oyacachi. We played some seriously fun soccer, which at 13,000 ft, left us all loopy for a while afterward.

We played chess, read, and spent hours in and around the hot springs. The thermal pools were emptied every morning, and refilled with spring water which as Simon put it “somehow even warmed up our hearts”. The only other people we saw at the hot springs were community members bathing and taking their showers, all while washing their clothes. Couples washed each other’s backs and women soaked around shirtless. The boys didn’t know what to do with themselves, trying to be subtle but grinning from ear to ear and pretending to look away as their eyes were stretched further then I’ve seen them. In asking Marco to try to just go with the flow, he responded “I’m trying but I can’t hold it in, I have to look!”. 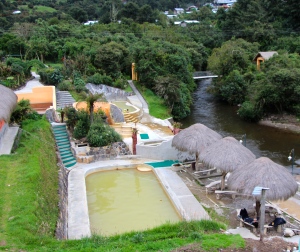 We took advantage of the detox opportunity and alternated between the hottest pool we could find and the ice cold river flowing alongside of it, over and over, all while drinking a gallon of water. I wonder how much of the fried Colombian food and beer that care of of?

Darin and Simon threw the frisbee for a while, as a man and his kids watched, fascinated. They finally joined the game and couldn’t get enough of it, laughing and squealing at the idea of the flying disc. In the end, it was obvious that we had to give them our frisbee as a “regalo”. They were thrilled. We later saw them at the soccer field throwing it around, open to the new possibilities this frisbee might bring.

On our last morning in Oyacachi, Darin and I woke up early to go for a run. Our run never accelerated beyond a walk because the altitude made the hilly town feel like a marathon. We left Coyacachi, enthralled with this simple way of life, happy to have “soaked” in it for a while. 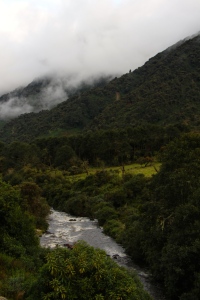