To quote Lonely Planet, San Gil really does “pack a punch.”  San Gil’s steep surrounding hills allow for a bird’s eye view that have made for colorful morning runs.

We’ve had a relaxing time and a bit of a regroup from the craziness of the previous days.  We were able to find pancakes for the kids, which, to them were as valuable as gold.  Simon skyped with his class.  They talked to him one by one and sang him songs, the look on his face was priceless.

We read, wrote, and walked around the busy streets indulging in ice cream and cafes con leche.  We couldn’t however pass up San Gil’s alluring bait of adventure sports.  Darin spent yesterday morning mountain biking the local hills, which as always, resulted in a perma-grin for the rest of the day. 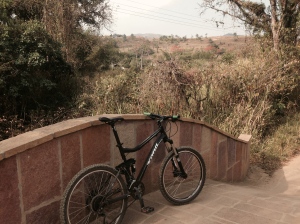 We spent an afternoon about 45 minutes out of town, at Cascada De Juan Cuir. 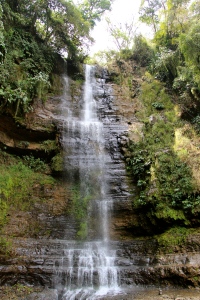 We hiked up to the 180 meter falls, and with the help of two guides, Simon, Darin and I rappelled down a 70 meter part of it.  I marveled at Simon’s courage.  He was very nervous, saying to me “well mommy, it was nice knowing you” as he leaned back over the sheer cliff of water. 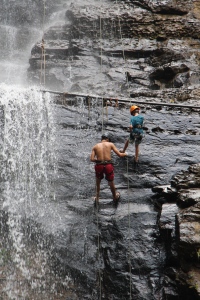 The rocks were slippery, the water was freezing,  and the walls of the falls were nothing but vertical. 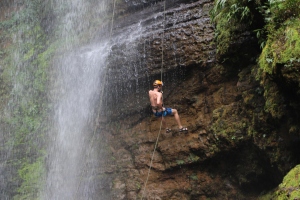 We loved it.  Marco is too young but he also didn’t want to do it.  He was thrilled to be below using our camera for the first time. 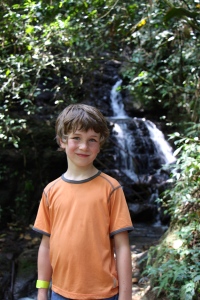 On the way back, we stopped in a very small town called Valle De San Jose for lunch.  A guy I met at a local hostel told us that this town was made special because of its’ chorizo.  Well, it didn’t disappoint.  Darin says this was the best thing he’s eaten in Colombia thus far.

This morning, Darin and the boys have gone white river rafting down the Rio De Fonce.  I decided to stay back and get us prepared for our week at El Cocuy.  We’ll be spending some time on our way, acclimating for the 12,000 foot elevation area that we’ll be hiking and camping through.   We’re putting some serious faith in our van.