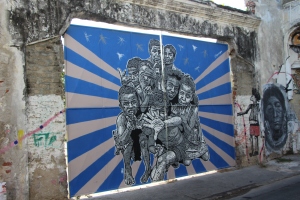 We’ve taken 2 trips to the SA Naves office, where we should be given our papers and invoices in order to get our beloved van (to be named at the equator) out of the port.  Nothing yet.  The ship with our van arrived this morning but all offices are closed on Sundays.  We’re very much hoping that tomorrow will be our lucky day, the very nice woman we’re working with made some promises that I hope she can keep.

In the meantime, Cartagena is our home and an excellent one at that.

Darin and I surfed the west jetty a few days ago. The water is so very warm here, it makes surfing in Oregon seem like much more work.  As Darin surfed and the kids built sand castles, I was repeatedly given sample massages from women walking the beach with buckets of massage oil in small ketchup like bottles.  They’d rub it on some body part despite the “no gracias”, convinced that the quality of their oil and skill can’t be refused.  It was actually very hard to pass up.

On Friday, we took a local city bus to the town of Pascaballos where a ferry would take us across the canal Del Dique.

Getting onto the ferry was full of chaotic bargaining banter with guys on motorcycles insisting that the only way to get to the beach once across the river was by motorcycle. 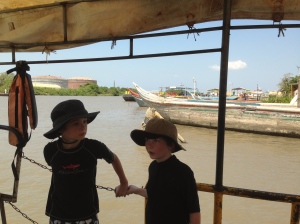 Once we got across and spent a good ten minutes negotiating a price, we found a taxi with broken seats to take us to the beach.  We enjoyed a day filled with relaxation and swimming in warm, beautifully blue water.  Marco allowed himself to bob up and down in the calm waves, the look on his face was priceless and one I won’t forget. 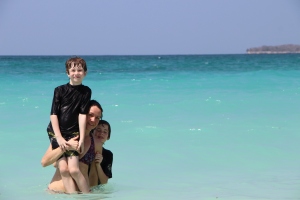 The return trip was on a boat filled with Columbians who were ready to party.  The dancing and signing that went on for the entire 2 hour trip would have made my french Canadian family feel right at home.

Marco seems to get a lot of attention here.  They all say he looks like Tom Sawyer with his freckles…”Es Tom Sawyer con los pecas!!”  Apparently they’ve all seen the same movie because in addition to the comments, Marco gets second glances every time we venture out.

We’ve spent the past 2 days mostly loafing around.  We swim, read, and take walks through the city. We’ve met several other people, including “overlanders” who have been traveling through Columbia and South America.   Our discussions have made us very eager to pick up our van and start our journey out of Cartagena.

People are much less inhibited than we are here.  Jesus, the spanish teacher that we took spanish speaking lessons from, tells us that Columbians have a strong love for their country.  He also tells us that the bad reputation Columbia gets comes down to a group of about 1000 bad asses that set the image for the other 48 million inhabitants.

The honesty and love of life that emanates from this place is humbling to say the least.

5 thoughts on “Tom Sawyer in Cartagena!”